Much about tornadoes remains a mystery. They are rare, deadly, and difficult to predict, and they can deal out millions or even billions of dollars in property damage per year. The U.S. typically has more tornadoes than anywhere else in the world, though they can occur almost anywhere. NSSL's tornado research targets ways to better understand how they form, and use that understanding to improve tornado forecasts and warnings to help save lives.

One of NSSL’s core missions is to understand severe weather and the hazards that accompany it, such as tornadoes. As such, NSSL routinely participates in field work designed to better understand them. Most recently, the TORUS project set out to use a variety of tools from several organizations in order to study this phenomena, including the use of UAVs. The goal is to study and better observe features near the ground that are thought to play a key role in tornado formation. We continue to study the vast amounts of data collected from projects like this to learn what specific ingredients thunderstorms need to form a tornado, what causes it to die, and why some rotating thunderstorms produce tornadoes and others do not.

NSSL researchers have created a computer model that simulates a tornado-producing thunderstorm in 3-D. We use this model to study what changes in the environment cause a thunderstorm to produce a tornado, and how the tornado and storm behaves as it encounters different weather conditions.

Most tornadoes come from rotating thunderstorms, called supercells. However, nearly 20% of all tornadoes are associated with lines of strong thunderstorms called “quasi-linear convective systems” (QLCS). QLCS tornadoes frequently occur during the late night and early morning hours when it can be more difficult to stay weather aware of severe hazards. NSSL researchers are looking for ways to detect non-supercell tornadoes more effectively.

The national network of weather radars now use dual-polarization technology, and NSSL continues to be a leader and major contributor to its ongoing scientific and engineering development. NSSL researchers discovered dual-polarization radars can detect debris from a tornado, helping forecasters pinpoint its location even at night or if it is wrapped in rain.

NSSL has a research phased array radar that also incorporates dual polarization technology, and can scan the entire sky for severe weather in less than a minute, five times faster than current weather radars. Researchers are hoping to collect more high-resolution data on developing tornadoes both in QLCS's and supercells to look for clues in radar data that a tornado is forming. Phased array radar has strong potential to aid the NWS in the forecast and warning decision process by providing new radar data more quickly.

Researchers at NSSL are developing the New Tornado Detection Algorithm, or NTDA, to help NWS forecasters better detect tornadoes and hail. National Weather Service forecasters currently use a Tornado Detection Algorithm which was also developed at NSSL, but as with all technology, it needed an update. The NTDA provides an operations update. It uses machine learning to evaluate storm criteria and calculates the probability of whether a tornado is present with each detection. The NTDA was trained to find tornado probabilities by looking at storm radar data from thousands of storms from 2011–2016. It is then validated against how it performs on data from 2017–2018. The algorithm takes into account multiple storm aspects, including information available from dual-polarization radar, and reviews the statistics related to each evaluated element. All of these factors are then combined by the NTDA to yield a probability of a tornado presence. The NTDA is currently being tested in NOAA’s Hazardous Weather Testbed on its performance and how NWS forecasters like the look and feel of the product.

NSSL's On-Demand web-based tool that helps confirm when and where tornadoes may have occurred by mapping circulations detected by radar on Google Earth satellite images. NWS forecasters can quickly review warnings and check their accuracy with this system. Emergency responders and damage surveyors have also used On-Demand to produce high-resolution street maps of affected areas, so they can more effectively begin rescue and recovery efforts and damage assessments.

NSSL's Warn-on-Forecast project aims to create highly detailed computer weather forecast models that predict what the atmosphere will look like in the future. These models are unique because they will use the latest weather observations and radar scans to continuously re-compute forecasts. We want these forecasts to accurately predict when and where tornadoes will occur in the next hour so forecasters can issue warnings based on that forecast and give people more time to find shelter.

We are very involved in shaping a “Weather Ready Nation” to improve the public's preparedness for extreme weather. We are looking at ways to improve the forecast and warning system, communicate threats to the public, increase community resilience, and identify gaps in our current understanding of planning, coordination and decision-making in a community.

Tornadoes can happen at any time of day at any time of the year. An NSSL scientist developed the Severe Thunderstorm Climatology to estimate the likelihood of severe weather events such as tornadoes on a given day in the U.S.

More than 50 researchers and students deploy a wide-ranging suite of instruments to collect data on supercell thunderstorms across the Great Plains during 2019 and 2020. The TORUS project aims at understanding the relationships between severe thunderstorms and tornado formation.

VORTEX-SE is a research program to understand how environmental factors characteristic of the southeastern United States affect the formation, intensity, structure, and path of tornadoes in this region. VORTEX-SE researchers also endeavor to determine the best methods for communicating forecast uncertainty related to these events to the public, and evaluate public response.

NSSL participates in the VORTEX2 experiment, the largest tornado research project in history, to explore how, when and why tornadoes form. The National Oceanic and Atmospheric Administration (NOAA) and National Science Foundation (NSF) supported more than 100 scientists, students and staff from around the world to collect weather measurements around and under thunderstorms that could produce tornadoes.

NSSL and OU conduct VORTEX-99, a small follow-on project to the original VORTEX. VORTEX-99 is operating when an F5 tornado tore through parts of south Oklahoma City on May 3, 1999. During the deadly outbreak, NWS forecasters rely on NSSL's Warning Decision Support System (WDSS) to make timely and accurate tornado warnings.

The Verification of the Origins of Rotation in Tornadoes EXperiment (VORTEX) is a two-year project designed to answer a number of ongoing questions about the causes of tornado formation. A new mobile Doppler radar is used and provides revolutionary data on several tornadic storms. You can read more about the history of the VORTEX projects at NSSL and see an interactive, multimedia timeline on the VORTEX @ NSSL page.

NSSL attempts to deploy TOTO, the TOtable Tornado Observatory in the path of an oncoming tornado from 1981-1984. They are unsuccessful.

NSSL conducts the Joint Doppler Operational Project (JDOP) in 1976 to prove Doppler radar could improve the nation's ability to warn for severe thunderstorms and tornadoes. This led to the decision in 1979 by the National Weather Service (NWS), U.S. Air Force's Air Weather Service, and Federal Aviation Administration (FAA) to include Doppler capability in their future operational radars.

An NSSL team intercepts a storm being scanned by the NSSL Doppler radar. The team documents the entire life cycle of a tornado on film. Researchers are able to compare the film images with Doppler radar data and discover a pattern that meant the tornado was forming before it appeared on film. They name this pattern the Tornado Vortex Signature (TVS). This important discovery eventually caused NOAA to begin a nationwide deployment of a national network of Doppler radars. 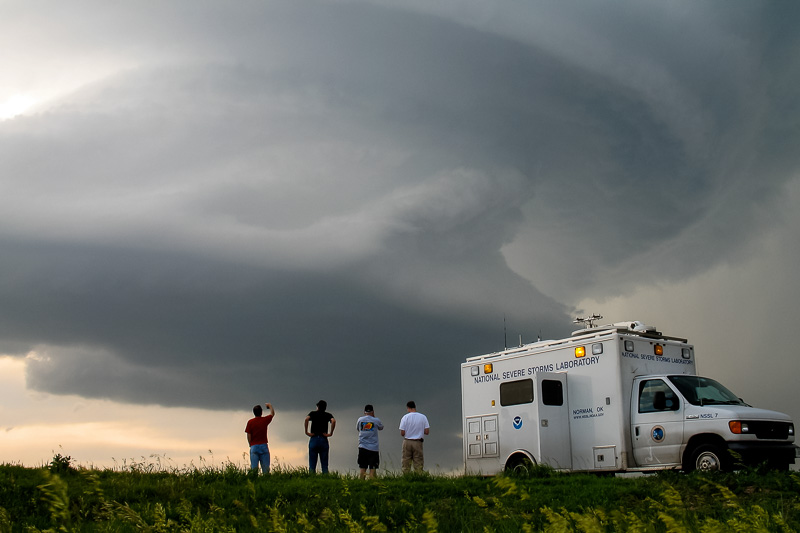 VORTEX2 was the largest tornado research project in history to explore how, when and why tornadoes form. [+]

VORTEX2 was the largest tornado research project in history to explore how, when and why tornadoes form.

NSSL researchers use 3-D computer models to study what changes in the environment cause a thunderstorm to produce a tornado. [+]

NSSL researchers use 3-D computer models to study what changes in the environment cause a thunderstorm to produce a tornado. 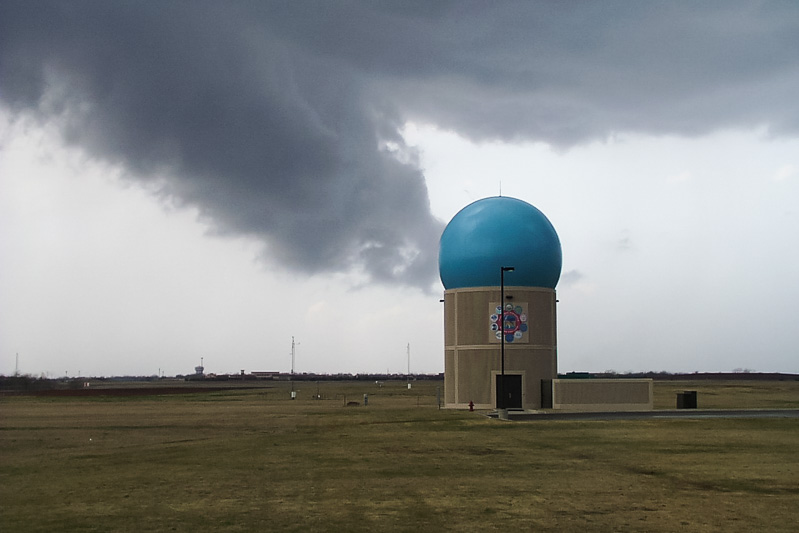 In the wake of a tornado outbreak, NSSL On-Demand produces high-resolution maps of affected areas that can be used by emergency responders to assist with rescue and recovery efforts. [+]

In the wake of a tornado outbreak, NSSL On-Demand produces high-resolution maps of affected areas that can be used by emergency responders to assist with rescue and recovery efforts. 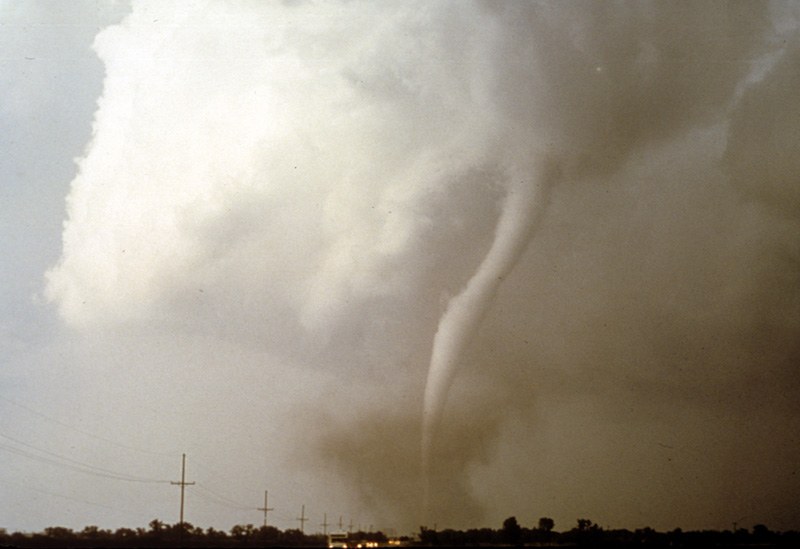 In 1973, NSSL scientists were able to identify the Tornado Vortex Signature pattern in Doppler radar data for the first time. [+]

In 1973, NSSL scientists were able to identify the Tornado Vortex Signature pattern in Doppler radar data for the first time. 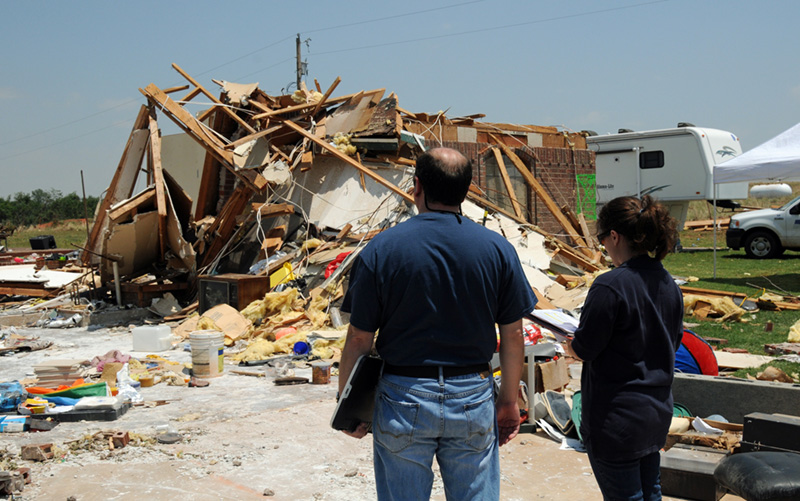 In looking for ways to improve the forecast and warning system, NSSL is helping to shape a “Weather Ready Nation,” to improve the public's preparedness for extreme weather. [+]

In looking for ways to improve the forecast and warning system, NSSL is helping to shape a “Weather Ready Nation,” to improve the public's preparedness for extreme weather.