What we do: Read more about NSSL's thunderstorm research here.

Along the Gulf Coast and across the southeastern and western states, most thunderstorms occur during the afternoon. Thunderstorms frequently occur in the late afternoon and at night in the Plains states.
What kinds of damage can thunderstorms cause?
Many hazardous weather events are associated with thunderstorms. Under the right conditions, rainfall from thunderstorms causes flash flooding, killing more people each year than hurricanes, tornadoes or lightning. Lightning is responsible for many fires around the world each year, and causes fatalities. Hail up to the size of softballs damages cars and windows, and kills livestock caught out in the open. Strong (up to more than 120 mph) straight-line winds associated with thunderstorms knock down trees, power lines and mobile homes. Tornadoes (with winds up to about 300 mph) can destroy all but the best-built man-made structures.
Where are severe thunderstorms most common?
The greatest severe weather threat in the U.S. extends from Texas to southern Minnesota. But, no place in the United States is completely safe from the threat of severe weather.
What is the difference between a Severe Thunderstorm WATCH and a Severe Thunderstorm WARNING?
A Severe Thunderstorm WATCH is issued by the NOAA Storm Prediction Center meteorologists who are watching the weather 24/7 across the entire U.S. for weather conditions that are favorable for severe thunderstorms. A watch can cover parts of a state or several states. Watch and prepare for severe weather and stay tuned to NOAA Weather Radio to know when warnings are issued.

A Severe Thunderstorm WARNING is issued by your local NOAA National Weather Service Forecast Office meteorologists who watch a designated area 24/7 for severe weather that has been reported by spotters or indicated by radar. Warnings mean there is a serious threat to life and property to those in the path of the storm. ACT now to find safe shelter! A warning can cover parts of counties or several counties in the path of danger.
How does a thunderstorm form?
Three basic ingredients are required for a thunderstorm to form: moisture, rising unstable air (air that keeps rising when given a nudge), and a lifting mechanism to provide the “nudge.”

The sun heats the surface of the earth, which warms the air above it. If this warm surface air is forced to rise—hills or mountains, or areas where warm/cold or wet/dry air bump together can cause rising motion—it will continue to rise as long as it weighs less and stays warmer than the air around it.

As the air rises, it transfers heat from the surface of the earth to the upper levels of the atmosphere (the process of convection). The water vapor it contains begins to cool, releases the heat, condenses and forms a cloud. The cloud eventually grows upward into areas where the temperature is below freezing.

As a storm rises into freezing air, different types of ice particles can be created from freezing liquid drops. The ice particles can grow by condensing vapor (like frost) and by collecting smaller liquid drops that haven't frozen yet (a state called "supercooled"). When two ice particles collide, they usually bounce off each other, but one particle can rip off a little bit of ice from the other one and grab some electric charge. Lots of these collisions build up big regions of electric charges to cause a bolt of lightning, which creates the sound waves we hear as thunder.
The Thunderstorm Life Cycle
Thunderstorms have three stages in their life cycle: The developing stage, the mature stage, and the dissipating stage. The developing stage of a thunderstorm is marked by a cumulus cloud that is being pushed upward by a rising column of air (updraft). The cumulus cloud soon looks like a tower (called towering cumulus) as the updraft continues to develop. There is little to no rain during this stage but occasional lightning. The thunderstorm enters the mature stage when the updraft continues to feed the storm, but precipitation begins to fall out of the storm, creating a downdraft (a column of air pushing downward). When the downdraft and rain-cooled air spreads out along the ground it forms a gust front, or a line of gusty winds. The mature stage is the most likely time for hail, heavy rain, frequent lightning, strong winds, and tornadoes. Eventually, a large amount of precipitation is produced and the updraft is overcome by the downdraft beginning the dissipating stage. At the ground, the gust front moves out a long distance from the storm and cuts off the warm moist air that was feeding the thunderstorm. Rainfall decreases in intensity, but lightning remains a danger.

Life cycle of a thunderstorm [+]

What does a thunderstorm look like?
Thunderstorms can look like tall heads of cauliflower or they can have “anvils.” An anvil is the flat cloud formation at the top of the storm. An anvil forms when the updraft (warm air rising) has reached a point where the surrounding air is about the same temperature or even warmer. The cloud growth abruptly stops and flattens out to take the shape of an anvil.

What kinds of damage can a thunderstorm cause? 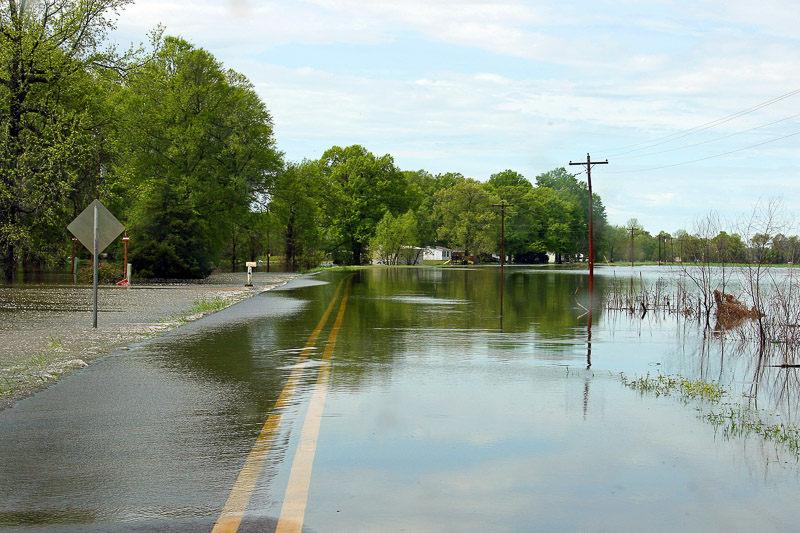 Under the right conditions, rainfall from thunderstorms causes flash flooding, killing more people each year than hurricanes, tornadoes or lightning. [+] 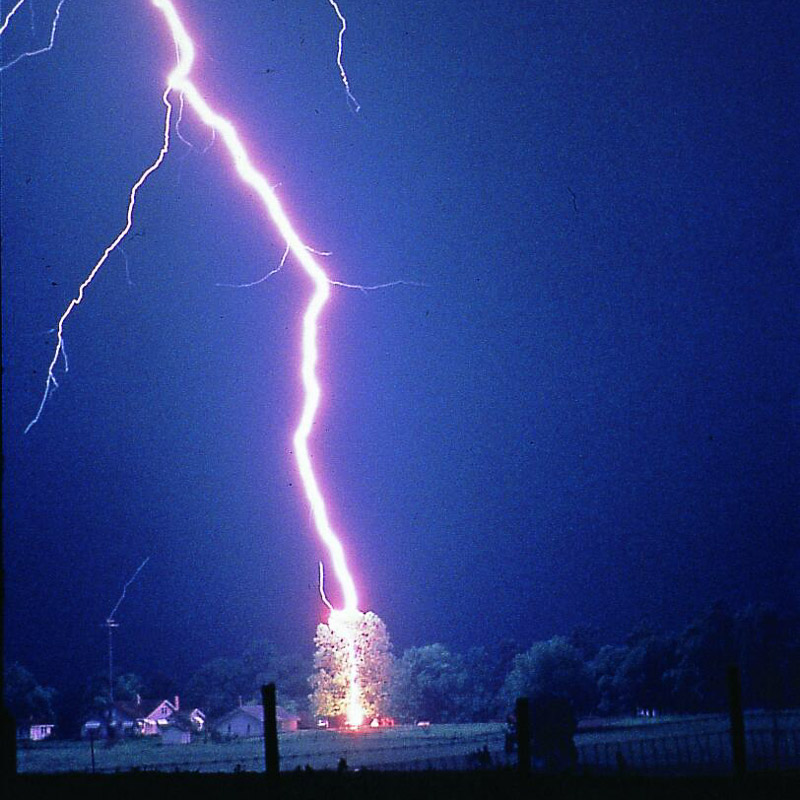 Lightning is responsible for many fires around the world each year, and causes fatalities. [+] 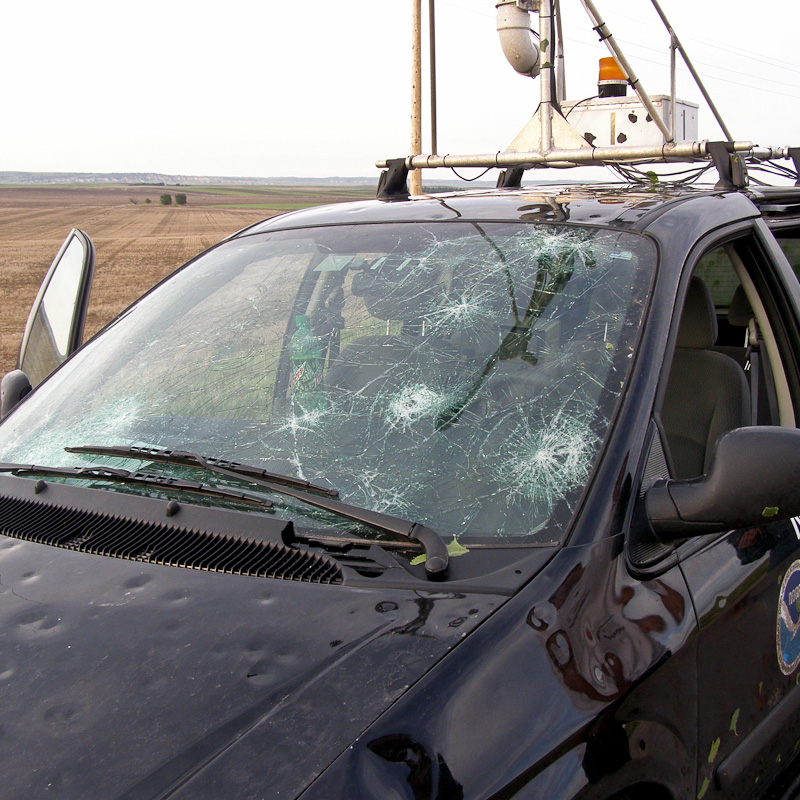 Hail up to the size of softballs damages cars and windows, and kills wildlife caught out in the open. [+] 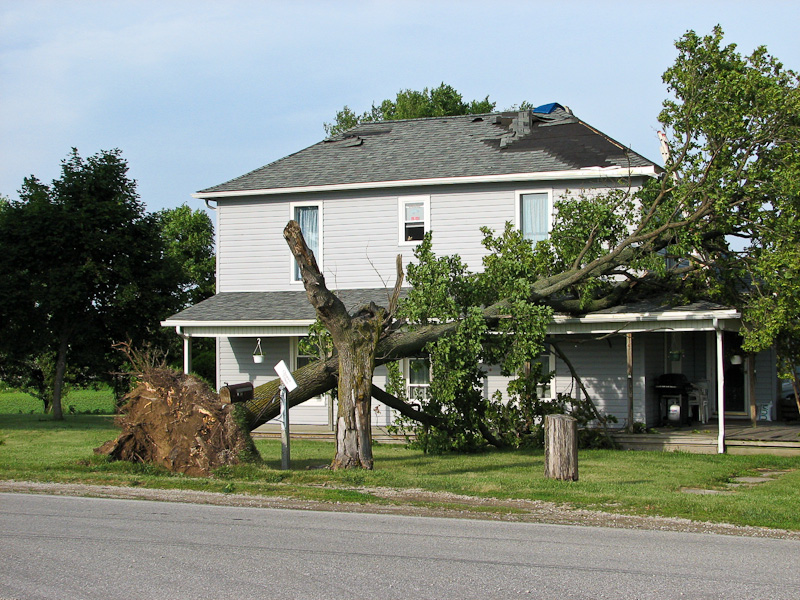 Strong (up to more than 120 mph) straight-line winds associated with thunderstorms knock down trees, power lines and mobile homes. [+] 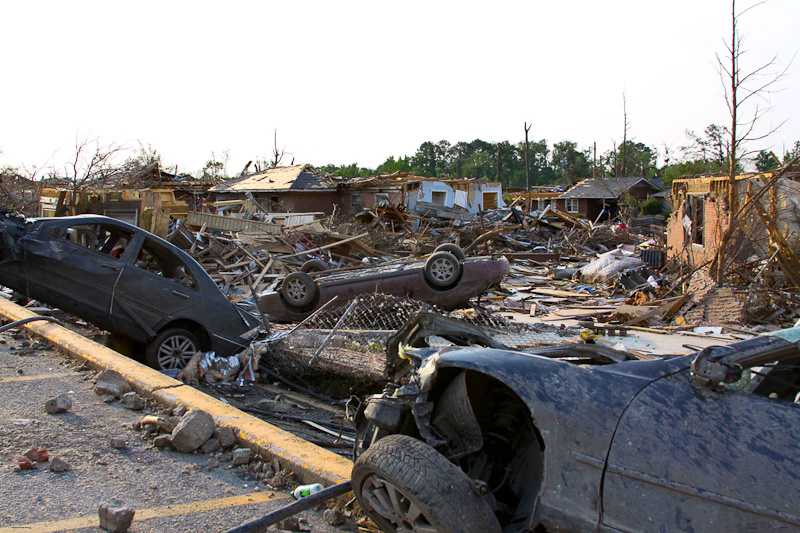 Tornadoes (with winds up to about 300 mph) can destroy all but the best-built man-made structures. [+]